How BACnet Devices Are Constructed

Modern control networks such as EtherNet/IP, Modbus/TCP and BACnet/IP use Ethernet for communications due to its high speed, lower cost and in some instances, the necessity to operate over structured wiring. Although the study of Ethernet does not require an understanding of application protocols, knowledge of application protocols has become increasingly important as modern networks are deployed. The latest protocols are all based upon Object Modeling which can be quite confusing to someone who has not been exposed to this abstract concept. This lesson introduces object modeling, object properties, and services as they pertain to a physical BACnet/IP device. Although the majority of BACnet devices support the master-slave/token-passing (MS/TP) network, newer devices now function over Ethernet.

BASremote as a Physical Device

Although any other product could have been used, we will use as our physical device example the BASremote by Contemporary Controls for this discussion. This product is intended as a gateway or remote input/output device complying with the BACnet/IP standard. When connected to an Ethernet infrastructure, the BASremote provides eight input/output points that can be accessed by any device on a BACnet network. Six of those points are universal input/outputs – meaning they can be field configurable to be either an analog or digital input or output. Two points are fixed as relay outputs. The BASremote supports the BACnet/IP standard as defined in Annex J of the BACnet standard and therefore requires no router in order to connect to Ethernet. But how do other devices access the BASremote? To explain how this works, one needs to study BACnet's object model and services.

As of this writing, the current revision of the BACnet standard is ANSI/ASHRAE 135-2016 from the American Society of Heating, Refrigerating and Air-Conditioning Engineers, Inc. If you purchase the standard from the ASHRAE bookstore, you will receive a 1378-page pdf file along with a stack of errata. In the errata are revisions that have not yet to make it to the document, and interpretations of the standard made by committee members in response to questions, proving that the BACnet standard continues to evolve. Like any other standard, the BACnet standard is not written as a tutorial on BACnet although some tutorials exist on the web. However, since the BASremote is a relatively simple BACnet device, studying this product offers an opportunity to learn how any device becomes BACnet-compliant.

Observing the BASremote sitting on a table, it appears in its physical form as a plastic enclosure with screw connectors for powering the unit and for connecting to field devices such as sensors and actuators (see Figure 1). An RJ-45 Ethernet port is located near the bottom left. According to the BASremote data sheet, in its simplest form it has six universal input/output points and two relay outputs. The six universal I/Os can be individually configured to be analog input, analog output, or digital input/output. In addition, the circuitry is flexible in that it can accommodate several voltage and current levels such as 0-10 VDC or 4-20 mA. Contact closures or thermistors can be sensed directly. There is one RJ-45 connector for the Ethernet network. To someone in the industry, the BASremote would be considered an eight-point remote I/O device with an Ethernet connection. Obviously, the Ethernet connection allows network access to the various I/O points, but how is this accomplished in the BACnet world? Once configured for the needs of the application, how can each physical point on the BASremote be queried from any point on the network without prior knowledge of the capabilities of the BASremote? Object modeling is the answer. 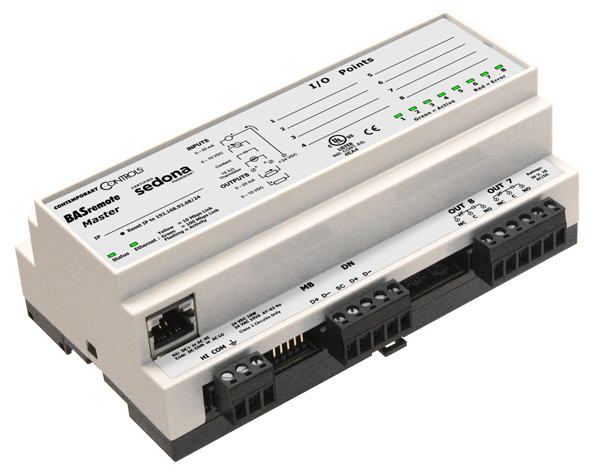 Although the BASremote is an eight-point I/O device, we know little more. To understand this device or any other BACnet device, it is best to view these devices as a collection of objects. An object is an abstract concept that allows us to identify both physical items such as I/O points, and non-physical concepts such as software and calculations. In Figure 2 we notice that the BASremote can be represented as a collection of objects of varying types such as Analog Input, Analog Output, Binary Input, Binary Output and Device. Since the BASremote has eight points of I/O, there will be eight objects created plus one for the device itself. Since six of the I/O points are universal, the number of each object type will vary depending upon the final configuration. This is not true for the device object since only one is allowed per physical device. There will be two Binary Output objects to correspond to the two relay outputs on the BASremote. In total, the BASremote can be modeled as a collection of nine objects with only five object types. As shown in Table 1 (next page), the current BACnet standard identifies 60 object types that would typically be found in building automation systems. BACnet compliant devices are not required to implement all 60. 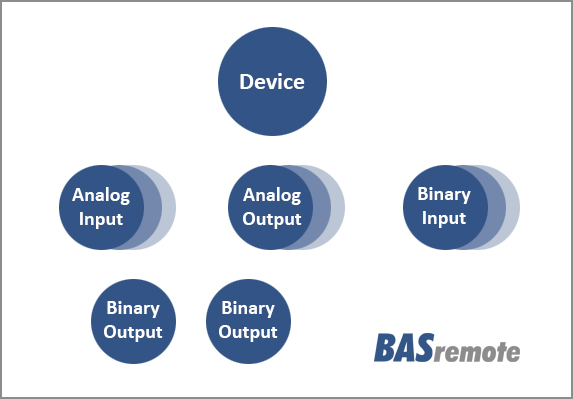 Figure 2 — The BASremote can be described as a collection of objects with one identifying the device itself.

Although objects can represent physical points, they can also describe processes or internal operations. Each object has a listing of properties that tell us about the nature of the object. This object listing varies with the object type. What the BACnet standard does is define the object types and the property fields for each object type. In this way, uniformity is ensured among vendors that will lead to interoperability between different vendor systems. The intent is to make objects "network visible" – any object can be queried from any point along the network. As the standard has evolved, object types have been added – bringing the total from the initial 18 to the current 60. These 60 object types are referred to as standard objects. A BACnet device need not support all object types, but if an object type is supported, it must comply with the standard object model for that object type. Each object type has a list of required properties and optional properties. Optional properties can be included at the manufacturer's discretion.

Table 1 — There are 60 BACnet object types. The BASremote uses five which are highlighted.

There is one object that must be included in any BACnet-compatible device and that is the Device object. There must be one, and only one, instance of the Device object whose structure is shown in Table 2. An instance number is the way of identifying items using object modeling. The Object Identifier must be unique within the complete BACnet network. It is comprised of the object type "Device" and an instance number. The default instance is 2749, but there is no significance to this value since it is changed by the installer through the web page during commissioning. The Object Name can be set as well to some meaningful description such as the location of the device. The remaining fields are set by the manufacturer.

Table 2 — The required properties of the Device object are listed. From this object, much can be learned about the device.

In Table 3 you will see all the required properties of one Analog Input instance which the manufacturer identifies as AI, Instance 2, meaning that the second physical point on the BASremote happens to be configured as an analog input. All properties in any object must be able to be read. Point 2 on the BASremote is connected to a thermistor located on the roof of the building in order to measure outside temperature. The actual temperature appears in the Present_Value property as 69.3. The unit of measure is degrees Fahrenheit as indicated in the Units property. The installer has identified the point as "Outside temperature" in the Object_Name property meaning that another BACnet device on the network can search for "Outside temperature" and obtain the actual outside temperature without caring which device or which point had the result. This demonstrates the power of object modeling.

Table 3 — The required properties of the Analog Input object for Instance 2. Notice that the value of the point is maintained in engineering units.

Having just objects with properties is not sufficient. We need services so that one BACnet device can access data from another or to command another device to take action. In order to learn what the outside temperature is, we would use the service called ReadProperty which allows the reading of properties within an object. In fact, this service is the one service that all BACnet devices must process. For example, the BASremote's point 2 knows the outside temperature. Another device functioning as a client makes a ReadProperty request to the BASremote which functions as the server. The request is made to the Present_Value property in the Analog Input, Instance 2 object. The BASremote receives the request and executes the command by providing the information.

There are 41 possible service requests and they are grouped into five categories (see Table 4.)

The ReadProperty service is included in the Object Access Services group as well as the WriteProperty service necessary to set outputs. These are both confirmed services. With these two simple operations, we can read and write I/O points.

Other interesting services are the Who-Is and I-Am which are unconfirmed services used to "discover" devices. With the Who-Is request, an initiating device is trying to determine the device object identifier; the actual network address, or both. A range of device object identifiers can be sent to restrict the search. In the most basic request, the Who-Is is sent as a broadcast message with no device object identifier restrictions. Since it is a broadcast message, all devices on the network will hear the request, but only those devices that can execute an I-Am service will respond. Each device capable of responding will send out their device identifier object along with some limited information on the device itself including the Vendor Identifier. With BACnet/IP, the response is sent as a broadcast UDP message so the source address can be learned from the response. The initiating device or any other listening device on the network can then construct a table of device object identifiers versus IP addresses so that future communication would not require this discovery process. Although the I-Am response logically follows the Who-Is request, an I-Am can be initiated at any time. It is usually sent when a device joins the network and announces to devices on the network that it is present.

With 41 possible services, discussing each service would make for a lengthy discussion. However, the concepts are the same as with the simple ReadProperty and WriteProperty services. As we will learn later, your simpler devices are only required to implement a fraction of the available services.

Although object modeling appears complex and awkward, it is the modern method of making devices "network visible". Objects are used to describe physical devices and the types of objects are defined in the BACnet standard. Objects have properties and the property list varies with the object type. In order to use objects to our advantage, devices must be able to provide services. The types of services are also defined in the BACnet standard. Objects, object properties, and services begin to define BACnet-compliant devices.